The decision by the Rhinebeck Central School District Board of Education this past Spring to pilot and assess a later start time for middle school and high school students is part of a larger conversation that is occurring statewide and nationally. The topic of starting school later, specifically for adolescents, is focusing on the scientific research regarding the benefits of more sleep for adolescents that can result from later school starting times.

The article below, excerpted from a recent edition of the New York State School Boards Association's On Board publication, outlines the issue that scientific research has addressed regarding adolescent sleep habits and needs in support of later school start times.

As the start of the 2016-17 school year is quickly approaching, the school district will be providing additional information over the next month or more to assist parents, students, and school staff prepare for this change and to benefit from the opportunity of a later school start time for our middle school and high school students.

When we receive a proposal to create a program or change some aspect of the way our district operates, we school board members often ask two questions:

(1) Is the proposal "evidence-based?" We want to make decisions based on facts, not opinions or hunches. Who among us does not feel reassured when our school administrators can provide summaries of scientific research to back up a new idea?

(2) Is the proposal in the best interest of our students? Sometimes answering this question requires a lot of analysis and consideration of alternatives. We also like to apply common sense: Will the proposal make sense to the community? Will it be a good fit for our district?

Imagine a school initiative with an overwhelming amount of evidence showing that it would be a boon to the health and well-being of our students, and less voluminous but high-quality evidence suggesting that it may encourage academic gains as well. Would you be interested? If so, you should consider a later start time for your high school.

Sleep deprivation is a widespread and chronic health problem among adolescents, according to experts. Early morning school start times just don't jibe with the body clocks of teenagers.

According to the National Sleep Foundation and an article published in Scientific American:

The National Sleep Foundation says sleep-deprived teens "are unable to maximize the learning opportunities afforded by the education system, since sleep deprivation impairs their ability to be alert, pay attention, solve problems, cope with stress and retain information." Other personal and societal problems linked to sleep deprivation include increased risk of "drowsy driving; emotional and behavioral problems such as irritability, depression, poor impulse control and violence; health complaints; tobacco and alcohol use; impaired cognitive function and decision-making; and lower overall performance in everything from academics to athletics."

What happens when districts change to later high school start times? The evidence seems to have reached a tipping point indicating that there are both health and academic benefits. "In the past three years . scientific studies have piled up, and they all lead to the same conclusion: a later start time improves learning," according to an article called "School Starts Too Early," on www.scientificamerican.com . (The article originally appeared in the September 2014 issue of Scientific American under the title "Sleeping through High School.")

The article references the work of Kyla Wahlstrom, director of the Center for Applied Research and Educational Improvement at the University of Minnesota. Her study tracked over 9,000 students in Minnesota, Colorado and Wyoming. She found that "after one semester, when school began at 8:35 a.m. or later, grades typically rose a quarter step in math, English, science and social studies."

Other research noted in the article shows that ".the later the delay, the greater the payoff ... The key is allowing teens to get at least eight hours of sleep, preferably nine."

Concerns about after-school activities, jobs, sports and bus transportation are the usual conversation stoppers when the topic of moving to a later high school start time is brought up. "Changing the start time of any school engenders the same kind of emotional reaction as does a district's deliberations about the closing of a school or making school boundary changes," Wahlstrom wrote in Archives of Pediatric Adolescent Medicine. "The time that a school starts is felt to be sacrosanct by those who have come to rely on it as a predictable part of their day and life. In a sense, the time that school starts is like a community norm. It predicts the rhythm of the day and the rhythms of personal and work schedules."

These factors and the natural resistance to change can make it difficult if not controversial for any district to move to a later start time. It is important for a district to create a decision-making process that involves all stakeholder groups. Planning and buy-in are key.

Some districts have switched bus schedules in the morning to transport elementary students first, which can work out for the better since younger children are more awake and alert earlier in the morning. If multiple districts take the plunge together, other aspects of scheduling could be addressed at the same time, such as a common high school bell schedule in order to remove a current barrier to distance learning. 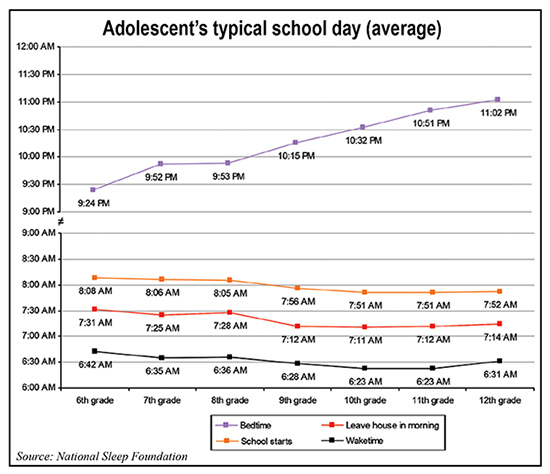